Highlight
Get to know these incredible Malaysian women who...
IWD 2021: A virtual campaign that celebrate women...
Trying to get your CNY necessities in the...
Grace’s Christmas Gift Guide 2020: What to get...
Meet the Mixologist: Samuel Ng, the free-spirited SEA...
The most wonderful time of the year is...
#TopPick: Sephora, PUMA, Island Chill and so on
Legend has it that you don’t know the...
Coway continues its journey in aiding the Orang...
6 basic rules of tidying that you should...
Home Entertainment Curling, A Sweeping Sport Of Strategy
Facebook Twitter Google + Pinterest
EntertainmentHealthHighlightHobbyLatestLiving

Curling, A Sweeping Sport Of Strategy

As the Winter Olympics 2018 breeze through, every so often we get a glimpse of a sport that makes you wonder if it can be called a sport. The sport in question is curling, which at first looks like a sport about sweeping the ice while ice bowling but without the pins.

These are called stones, to which you slide them to the target as closely as possible

It turns out in fact that curling is a unique sport and it has deep strategies and playstyles as well. The objective of the game is simple, the sliding object that you see on TV, called stones, have to be placed as close as possible to the designated bullseye. To do so, however, takes a mix of teamwork, strategy and from what we have seen, a lot of shouting.

So how does curling work, and how do you play it? To start off, you need to have a team of 4 curlers and there are a total of 10 teams within the Men and Women’s category. Each team has eight stones to play with and they have to score the most points with it by the end of the round.For each stone that is closer to the target than the opponent, the team is awarded a single point. A game usually consists of ten ends, but if the points lead to a draw, there will be a tiebreaker to decide the winner. 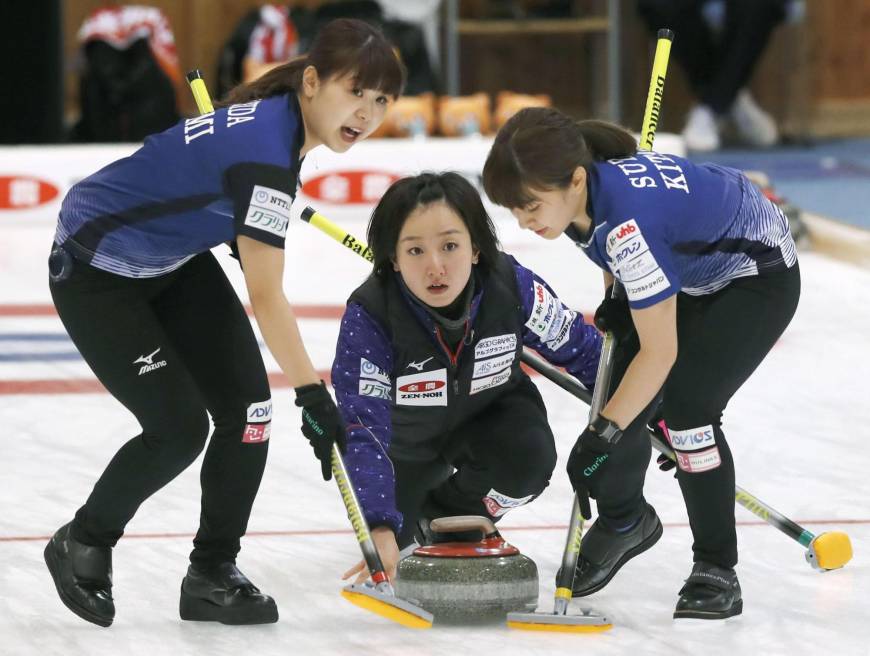 Matches are played on rinks and contested by four players on each side:

Lead: Throws the first two rocks of the end and then sweeps the next six. They must be very good at throwing guards (stones that stop in front of the house) and be a strong sweeper.

Second: Throws the third and fourth stones of the end and should be strong at making take-outs (hitting an opponent’s stone off the sheet). They sweep the first two stones and then the final four of the end and usually have a good sweeping relationship with the skip.

Third (or vice-skip): Throws the fifth and sixth rocks of the end, must be good at all shots but especially draws (stones that stop in the house). It is the third’s job to set up the shots that will be thrown by the skip and to help the skip discuss the strategy of the final two stones of the end.

Skip: Captain of the team and decides strategy. It’s their job to tell the other players where to throw their shots and when to sweep. The skip also delivers the last two shots of the end so they must be good at all types of shots.

The strategy comes to play when the sweepers have to determine how much they have to sweep the ice in order to either increase the distance of the travelling stone or slow it down. This is where its nickname “Chess on Ice” comes into play, as these teams have to think of the best approach to score the most points.

Eats Sini SS19 is Making Waves Among Subangnites As An Affordable, High-End Eatery

Ramadan 2021: Here’s a guide to the best buffets in Selangor for buka puasa

A new month, a new list of things to buy for you and your loved ones

How Fishing Is Applying FinTech

Add a personal touch to your whisky