Highlight
LGBTQ+ and what should you know about this...
Malaysians share their lovey-dovey stories with us and...
9 underrated online stores you wish you knew...
Lee Chong Wei to grace Madame Tussauds Hong...
M’sian talents who are here to prove their...
Rediscover Your Love for Beer and Food this...
32 Shades of Colors From Nippon Paint
50% of the New Drinks Menu at The...
Taboos Around Asian Countries While Travelling
Beer Enthusiasts Can Enjoy Heineken 0.0 At More...
Home Entertainment Movie Review: Future World, The Worst Movie Of 2018 Thus Far
Facebook Twitter Google + Pinterest
EntertainmentHighlightLatestMovie

James Franco is like the unicorn of the Hollywood space, in such a way that sometimes seeing him appear can be either a good thing or the exact opposite. The same is true for his works as he is always stuck in between creating a rather good slacker flick or crashing hard with one of his weird films.

You are free to meme this with any caption, as it has no impact on from the movie whatsoever

Sadly, in Future World, it is the latter. Future World is the kind of film that I personally would not go out to a theatre to watch unless coaxed by a friend or in this case, a dubious friend, but nevertheless, James Franco is a familiar face and with his recent accolades at the Oscars, I have given him the benefit of the doubt but with this film, I should have listened to my guts and watched “Solo” instead. 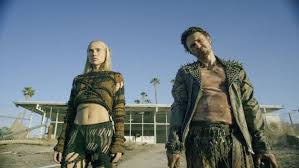 This is exactly how we look after this movie

The premise shows a generic post-apocalyptic scenario whereby the world ends due to mutual destruction from nuclear warfare and the survivors continue to war among themselves until there are only remnants of a civilisation. Oh and also they decided to add in androids because they were used in the war and the last remaining android decides to help humanity by rebooting.

Don’t be fooled by the premise however as the only thing post-apocalyptic about this movie is the Mad Max/Waterworld themes whereby James Franco and friends decide to basically show off their Abu Dhabi Dune Biking skills.

The real lure of the movie was the big name casts such as Lucy Liu, Snoop Dog, Milla Jovovich and Method Man but aside from this, the writing from Future World is just as lazy as the naming for their characters. A pimp who deals in the sex trade named Love Lord, a drug lord called Drug Lord, a queen called Queen, well you see where I am getting at.

The plot is non-existent unless you count the various horrible excuses for moving plot, such as one moment the characters are talking about a 1000 miles journey to a certain island by Bike, but the main character flusters his way there on foot. It seems that the director has also left out physical realism out of the movie as well considering that the film takes place in the wasteland desert, not a single individual take a sip of water.

Once you get through all the bad writing, you also have to deal with the bad editing. There are no transitions between scenes leaving you confused as they skip through scenes without warning often leaving you disorientated, if you are watching in our local cinemas, you will also have to deal with our own local censorship board which makes the editing feel even worse.

All in all, this was the worst waste of RM16 for a movie ticket and I would sincerely like to get back 1 hour 30 minutes worth of my life back. yes, I am, talking to you James Franco.

5 Money Management Habits You Need to Change in 2019

Eats Sini SS19 is Making Waves Among Subangnites As An Affordable, High-End Eatery

My 2cents: Mia Khalifa Blew Fan Away with a Mighty Punch

Outdated Fashion That Is In Style Now

Ocean’s 8 Trailer Just Dropped, And We Are Intrigued

Local Avengers Parody Gets Attention Of The Russell Brothers

No, Singapore, Not This Time!

WeTV brings you the global premiere of Eternal Love of Dream