Highlight
Get your significant other something different this coming...
British engineers claim to have discovered the location...
Take advantage of unique discounts on a selection...
Get to know these incredible Malaysian women who...
IWD 2021: A virtual campaign that celebrate women...
Trying to get your CNY necessities in the...
Grace’s Christmas Gift Guide 2020: What to get...
Meet the Mixologist: Samuel Ng, the free-spirited SEA...
The most wonderful time of the year is...
#TopPick: Sephora, PUMA, Island Chill and so on
Home Education Barack And Michelle Obama To Produce Netflix Content
Facebook Twitter Google + Pinterest
EducationHighlightLatestLivingUpcoming

Barack and Michelle Obama have signed a deal to produce “films and series” for Netflix, it has been confirmed.

The ex-US president, the former first lady and the global entertainment service announced the deal in a statement on Monday.

The Obamas have created Higher Ground Productions as the entity under which they will produce the content.

Mr Obama said: “One of the simple joys of our time in public service was getting to meet so many fascinating people from all walks of life, and to help them share their experiences with a wider audience.

“That’s why Michelle and I are so excited to partner with Netflix – we hope to cultivate and curate the talented, inspiring, creative voices who are able to promote greater empathy and understanding between peoples, and help them share their stories with the entire world.”

Mrs Obama said: “Barack and I have always believed in the power of storytelling to inspire us, to make us think differently about the world around us, and to help us open our minds and hearts to others.” 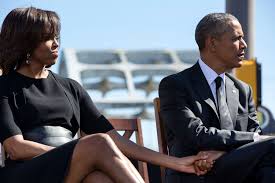 The shows would give Mr Obama, who was US president for eight years until Donald Trump took over after the 2016 election, an unfiltered way of talking to the public.

The Netflix deal will give them the ability to reach 125 million subscriber households in 190 countries.

Among the issues close to the former president’s heart are health care, voting rights, foreign policy and climate change; while the former first lady championed the importance of nutrition during her time in the White House.

In March it was reported that talks between Netflix and the couple were “advanced”, and it was also said that the Obamas would not use the shows to respond to the current US President or their other conservative critics.

It has not been revealed how much the Obamas will be paid under the deal.

A Year of Colourful Desserts

Why Is Dental Scaling Important To You?

Who knew IKEA would come up with an odd menu featuring black charcoal sausages and ice cream? YUMMY!

Dry March: The perfect campaign for us all — stay fit, eat and drink with the 0.0

Summer 2021 Collection: Strut down the runway with playful prints and with sustainability in mind