Highlight
Get your significant other something different this coming...
British engineers claim to have discovered the location...
Take advantage of unique discounts on a selection...
Get to know these incredible Malaysian women who...
IWD 2021: A virtual campaign that celebrate women...
Trying to get your CNY necessities in the...
Grace’s Christmas Gift Guide 2020: What to get...
Meet the Mixologist: Samuel Ng, the free-spirited SEA...
The most wonderful time of the year is...
#TopPick: Sephora, PUMA, Island Chill and so on
Home Highlight Salon Magazine Tries To Beat Ad-Blockers With Cryptomining
Facebook Twitter Google + Pinterest
HighlightLatestTech

For thoe of us with active social media friends, we have most likely come across an article by Salon which is a lifestyle website with various content, and as all websites do, they have plenty of pop-up ads to create revenue when all we want to do is read the damn article. Thus we employ our ad-blockers, but recently, it seems that Salon magazine is attempting to beat these ad-blockers by using us for their cryptocurrency mission. 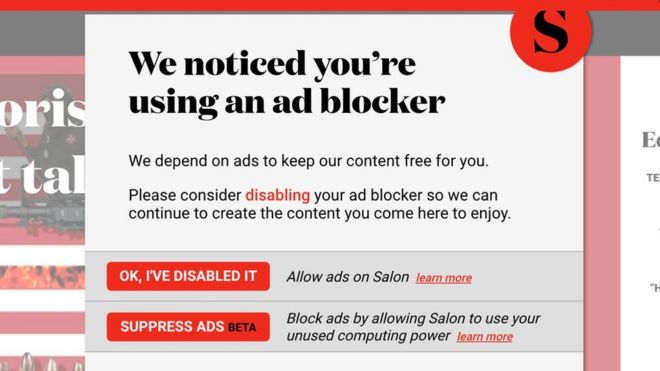 As you can see in the image above, when faced with a prompt message about the ad-blocker, you can either choose to disable the ad-blocker or go ad free by letting Salon tap into your unused computing power. Some might not feel like there wouldntbe anything wrong with that, except if you were to view it from a cryptocurrency standpoint, you would know that this is rather cunning.

Cryptomining is done by solving complex algorithms in order to gain Bitcoins, and by using a huge amount of computing power. This means that Salon is attempting to use random computing power to help them mine for more revenue. Additionally, Salon is using CoinHive, the same mining tool that wasused by hackers in an attack against the UK,US and elsewhere whereby hackers took control of their victims PC to use them for mining.

The difference here, is that Salon asks the users consent before making use of their computing power. In the FAQ section of their website, this is what Salon has stated based on their new attempt to make money:

“For our beta program, we’ll start by applying your processing power to mine cryptocurrencies to recoup lost ad revenue when you use an ad blocker,” the company said. “We plan to further use any learnings from this to help support the evolution and growth of blockchain technology, digital currencies and other ways to better service the value exchange between content and user contribution.”

So will this new method catch on with other type of news website, and how will we justify the means if we have to subscribe to multiple outlets. This is definitely one off the ballsiest methods used yet.

How Valentine’s Day is Celebrated Around the World

Popping Pimples Toy Are A Hit!

#GraceReviews: Get your American Tex-Mex cravings fulfilled with Captain Shrimp

Explore the new RS-2K by PUMA

ABBA To Reveal A New Single After 35 Years

March 2021: Pamper yourself with these 12 must-haves